A propelling unit moves the carrier stream through the flow injection analyzer. Although several different propelling units have been used, the most common is a peristaltic pump. As illustrated here, a peristaltic pump consists of a set of rollers attached to the outside of a rotating drum. Tubing from the reagent reservoirs fits between the rollers and a fixed plate. As the drum rotates the rollers squeeze the tubing, forcing the contents of the tubing to move in the direction of the rotation. Peristaltic pumps provide a constant flow rate, which is controlled by the drum’s speed of rotation and the inner diameter of the tubing. Flow rates from 0.0005–40 mL/min are possible, which is more than adequate to meet the needs of FIA where flow rates of 0.5–2.5 mL/min are common. One limitation to a peristaltic pump is that it produces a pulsed flow—particularly at higher flow rates—that may lead to oscillations in the signal. 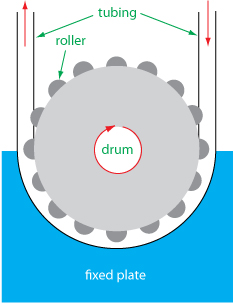 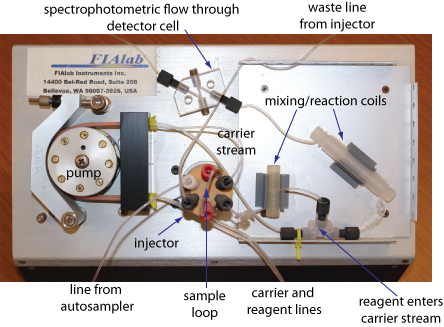 An FIA curve, or fiagram, is a plot of the detector’s signal as a function of time. The illustration below shows a typical fiagram for conditions in which both convection and diffusion contribute to the sample’s dispersion. Also shown on the figure are several parameters for characterizing a sample’s fiagram. 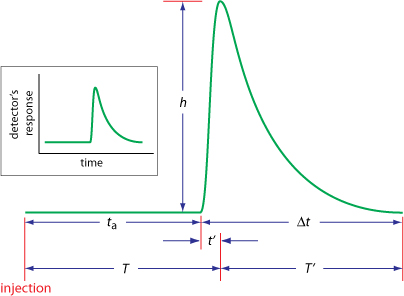 Two parameters define the time for a sample to move from the injector to the detector. Travel time, ta, is the time between the sample’s injection and the arrival of its leading edge at the detector. Residence time, T, on the other hand, is the time required to obtain the maximum signal. The difference between the residence time and travel time is t′, which approaches zero when convection is the primary means of dispersion, and increases in value as the contribution from diffusion becomes more important.

The time required for the sample to pass through the detector’s flow cell—and for the signal to return to the baseline—also is described by two parameters. The baseline-to-baseline time, Δt, is the time between the arrival of the sample’s leading edge to the departure of its trailing edge. The elapsed time between the maximum signal and its return to the baseline is the return time, T ′. The final characteristic parameter of a fiagram is the sample’s peak height, h.

Of the six parameters illustrated here, the most important are peak height and return time. Peak height is important because it is directly or indirectly related to the analyte’s concentration. The sensitivity of an FIA method, therefore, is determined by the peak height. The return time is important because it determines the frequency with which we may inject samples. As illustrated below, if we inject a second sample at a time T ′ after injecting the first sample, there is little overlap of the two FIA curves.

By injecting samples at intervals of T ′, we obtain the maximum possible sampling rate. 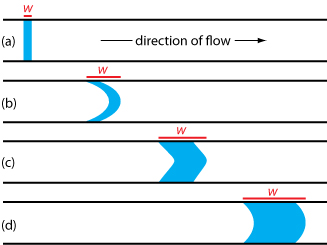 The second contribution to the sample’s dispersion is diffusion due to the concentration gradient between the sample and the carrier stream. As shown in the illustration below, diffusion occurs parallel (axially) and perpendicular (radially) to the direction in which the carrier stream is moving. Only radial diffusion is important in flow injection analysis. Radial diffusion decreases the sample’s linear velocity at the center of the tubing, while the sample at the edge of the tubing experiences an increase in its linear velocity. Diffusion helps to maintain the integrity of the sample’s flow profile, as shown in (c) above, preventing samples in the carrier stream from dispersing into one another. Both convection and diffusion make significant contributions to dispersion from approximately 3–20 s after the sample’s injection. This is the normal time scale for a flow injection analysis. After approximately 25 s, diffusion is the only significant contributor to dispersion, resulting in a flow profile similar to that shown in (d) above.

Flow injection analysis (FIA) was developed in the mid-1970s as a highly efficient technique for the automated analyses of samples. Unlike a centrifugal analyzer, in which the number of samples is limited by the transfer disk’s size, FIA allows for the rapid, sequential analysis of an unlimited number of samples. FIA is one example of a continuous-flow analyzer, in which we sequentially introduce samples at regular intervals into a liquid carrier stream that transports them to the detector.

A schematic diagram detailing the basic components of a flow injection analyzer is shown here. The reagent serving as the carrier is stored in a reservoir, and a propelling unit maintains a constant flow of the carrier through a system of tubing that comprises the transport system. We inject the sample directly into the flowing carrier stream, where it travels through one or more mixing and reaction zones before reaching the detector’s flow-cell.

This is the simplest design for a flow injection analyzer, consisting of a single channel and a single reagent reservoir. Multiple channel instruments that merge together separate channels, each introducing a new reagent into the carrier stream, also are possible.

Kinetic Analysis of a Mixture

The figure below illustrates how we can use a kinetic analysis to determine the concentration of two analytes, A and B, provided that there is a difference in their reaction rates. In this example, B reacts more slowly (kB = 0.1 min–1) than A (kA = 1 min–1).

Elucidating Mechanisms for the Inhibition of Enzyme Catalysis

There are several pathways for the reversible binding of an inhibitor to an enzyme, as shown here.

We can identify the type of reversible inhibition by observing how a change in the inhibitor’s concentration affects the relationship between the rate of reaction and the substrate’s concentration. As shown here

when we display kinetic data using as a Lineweaver-Burk plot it is easy to determine which mechanism is in effect. For example, an increase in slope, a decrease in the x-intercept, and no change in the y-intercept indicates competitive inhibition. Because the inhibitor’s binding is reversible, we can still obtain the same maximum velocity—thus the constant value for the y-intercept—by adding enough substrate to completely displace the inhibitor. Because it takes more substrate, the value of Km increases, which explains the increase in the slope and the decrease in the x-intercept’s value.

For an enzyme–substrate reaction following a simple mechanism

consisting of the initial formation of an enzyme–substrate complex, ES, and its subsequent decomposition to form the product, P, and to release the enzyme to react again, the rate of product formation for this reaction is

where k2 is the rate of the conversion of the enzyme-substrate complex, E–S, to product, [E]0 is the enzyme’s initial concentration, [S] is the substrate’s concentration, and Km is a constant called the Michaelis constant. A plot of this equation is shown here. 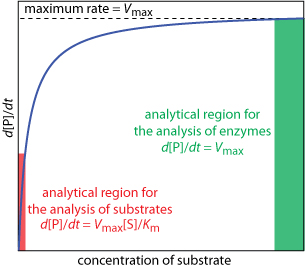 where v is the reaction’s rate. As shown below, a plot of 1/v versus 1/[S], which is called a double reciprocal or Lineweaver–Burk plot, is a straight line with a slope of Km/Vmax, a y-intercept of 1/Vmax, and an x-intercept of –1/Km. 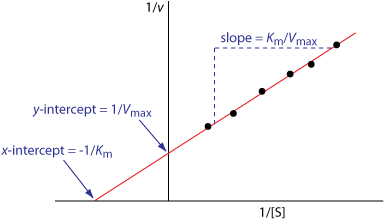 Enzymes are highly specific catalysts for biochemical reactions, with each enzyme showing a selectivity for a single reactant, or substrate. For example, the enzyme acetylcholinesterase catalyzes the decomposition of the neurotransmitter acetylcholine to choline and acetic acid. Many enzyme–substrate reactions follow a simple mechanism that consists of the initial formation of an enzyme–substrate complex, ES, which subsequently decomposes to form product, P, releasing the enzyme to react again.

The rate of product formation for this reaction is

where k2 is the rate of the conversion of the enzyme-substrate complex, E–S, to product, [E]0 is the enzyme’s initial concentration, [S] is the substrate’s concentration, and Km is a constant called the Michaelis constant. A plot of this equation is shown here.

For high concentration of substrate, highlighted in green, the rate equation simplifies to

and we can use the rate to determine the concentration of substrate.

Instrumentation for Kinetic Methods of Analysis

A significant experimental problem when the reaction’s kinetics are fast is ensuring that we rapidly and reproducibly mix the sample and the reagents. For a fast reaction we need to make measurements in a few seconds, or even a few milliseconds. This presents us with both a problem and an important advantage. The problem is that rapidly and reproducibly mixing the sample and the reagent requires a dedicated instrument, which adds an additional expense to the analysis. The advantage is that a rapid, automated analysis allows for a high throughput of samples.

A variety of instruments have been developed to automate the kinetic analysis of fast reactions. One example, shown here, is the stopped-flow analyzer. The sample and reagents are loaded into separate syringes and precisely measured volumes are dispensed into a mixing chamber by the action of a syringe drive. The continued action of the syringe drive pushes the mixture through an observation cell and into a stopping syringe. The back pressure generated when the stopping syringe hits the stopping block completes the mixing, after which the reaction’s progress is monitored spectrophotometrically. With a stopped-flow analyzer it is possible to complete the mixing of sample and reagent, and initiate the kinetic measurements in approximately 0.5 ms. By attaching an autosampler to the sample syringe it is possible to analyze up to several hundred samples per hour. 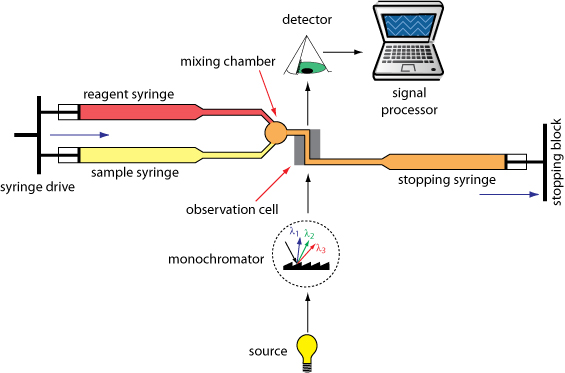 Another instrumental design is the centrifugal analyzer, a partial cross section of which is shown below. The sample and the reagents are placed in separate wells, which are oriented radially around a circular transfer disk. As the centrifuge spins, the centrifugal force pulls the sample and the reagents into the cuvette where mixing occurs. A single optical source and detector, located below and above the transfer disk’s outer edge, measures the absorbance each time the cuvette passes through the optical beam. When using a transfer disk with 30 cuvettes and rotating at 600 rpm, we can collect 10 data points per second for each sample. 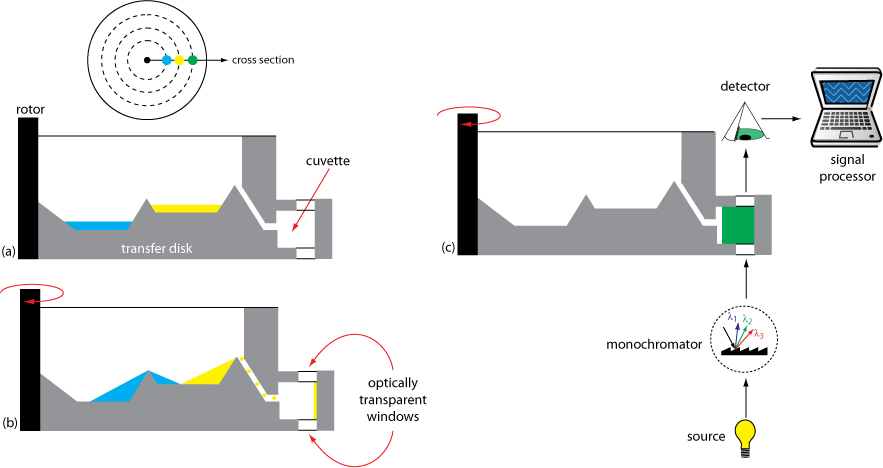